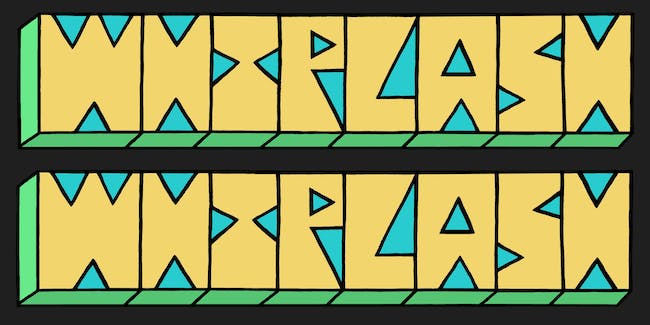 Shalewa Sharpe hosts Whiplash, this long-running showcase featuring some of the best comedians in the world.

Shalewa Sharpe tells jokes. She developed her sly yet goofy style in Atlanta, where she was raised. Currently in Brooklyn, New York, she coproduces and hosts a number of shows, including “Thug Passion Presents,” a lively table read and celebration of classic black movies. In May 2016, her debut album, “Stay Eating Cookies,” was released on Rotknee Presents Records; it can be found on iTunes, Amazon, Spotify, and the rest of ‘em. She tells jokes on Twitter (@silkyjumbo) and posts self portraits of varying success on Instagram (@silkyjumbo).

Jackie Kashian is a comic whose current album, I Am Not The Hero Of This Story, was #1 comedy album on iTunes and Amazon and is critically acclaimed. She is in the thirteenth year of her podcast The Dork Forest, where she talks with people about what they love to do, think about and collect. She also has a podcast with Laurie Kilmartin where they complain and celebrate standup comedy. It is called The Jackie and Laurie Show.

Josh Johnson, is a standup, writer and performer from Louisiana by way of Chicago. He is currently a writer on The Daily Show with Trevor Noah and has been featured on Kevin Hart’s Hart of the City. Josh was named one of Comedy Central’s ‘Comics to Watch’ in 2015 and one of the Just For Laughs Festival’s ‘New Faces’ in 2016. He is a former writer and performer on The Tonight Show Starring Jimmy Fallon, where he also made his late-night stand-up debut in 2017.

As a stand-up, Josh has performed at clubs, colleges and festivals around the world, including JFL Montreal, Bumbershoot, Moontower, Riot LA, Bridgetown, High Plains and the New York Comedy Festival. On screen, Josh has appeared on CONAN, @Midnight with Chris Hardwick, and, in 2017, he released his Comedy Central half-hour special and album ‘I Like You’.

Josh’s next stand-up special will be released on Netflix in 2018.

Brett Davis is an Andy Kaufman Award-winning comedian, often performing under the guises of his many twisted characters. He hosts The Podcast For Laundry on Forever Dog, a dark satire of niche podcasting. He previously hosted, wrote and produced over 170 episodes of the live public access variety show, The Special Without Brett Davis. He has been named a “Comic To Watch” by Comedy Central and he was profiled by the New York Times.


He is a writer and cast member for the National Lampoon Radio Hour, and a voice on Our Cartoon President. He has appeared on Late Show with Stephen Colbert, The Chris Gethard Show, Jon Glaser Loves Gear, and Animals, as well as the film Clara's Ghost. He also wrote and starred in several web series for Comedy Central and IFC, including Boy Band, Mad Memes and Autumn With Dracula.

Brendan Eyre is one of New York's top up and coming comedians. He has appeared on Late Night with Seth Meyers, Adam Devine's House Party on Comedy Central, Gotham Comedy Live on AXS TV, and Red Eye on Fox News. He was a New Face of Comedy at the prestigious Just for Laughs comedy festival in Montreal and is a regular on Sirius Satellite Radio. Brendan hosts the popular Rad Dudecast Podcast along with Anthony Devito and Greg Stone and headlines clubs throughout the country, He is also a blue belt in jiu jitsu.

Alex English is an American stand-up comedian, actor, and writer born and raised in Detroit, Michigan.


Alex has written for such shows as The Rundown with Robin Thede on BET and The Fix with Jimmy Carr on Netflix. He has made appearances on Night Train with Wyatt Cenac on STARZ and Funny How? on Viceland.


His stand up résumé consists of opening for such acts as: Michelle Wolf, Roy Wood Jr, Sam Morril, Sasheer Zamata, and James Adomian. He currently lives in New York City.

Courtney Maginnis is a comedian and actress based in Brooklyn, NY. She performs standup all over NYC including Caroline's, NY Comedy Club and The Stand. She has been a part of the Brooklyn Comedy Festival, Underground Comedy Festival, Red Clay Comedy Festival and more. Courtney has been featured in sketches for Comedy Central, College Humor, as well as starred in the short film, "The Comedian's Wife" which was an Official Selection for the 2016 Big Apple Film Festival. She was most recently the subject for a story on NPR's Studio 360. Check out Courtney’s podcast, The Narcisistas and visit her at her weekly show, “Let’s See What Else” at Poco NYC every Wednesday at 8pm.