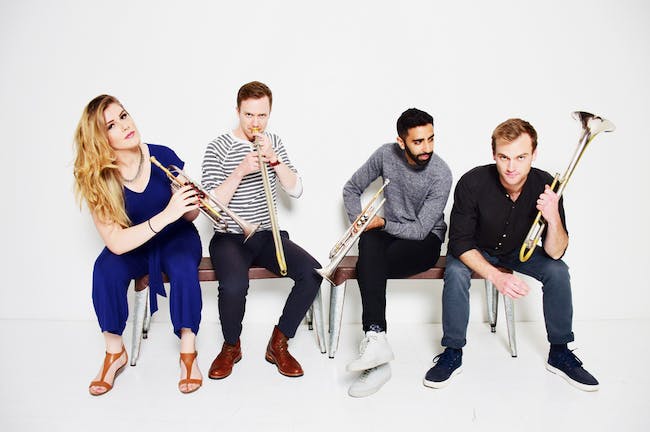 iCal
Google
The Westerlies are bringing their record release show to Littlefield! Joined by special guest Johnny Gandelsman.
The Westerlies

Wherein Lies the Good, the third album from Seattle-bred, Brooklyn-based brass quartet The Westerlies, presents a radical reimagining of the American song. “Skilled interpreters who are also adept improvisers” (NPR’s Fresh Air), The Westerlies approach this ferociously unique set of music with the full breadth of their expressive palette: the delicacy and precision of the concert hall, the breathless spontaneity of a midnight jam session, and the earthy grit of a backyard hoedown. Following a series of high-profile collaborations with Fleet Foxes, Common, Theo Bleckmann, and Dave Douglas, The Westerlies return to their quartet roots with a broad collection of original compositions and arrangements of time-tested American songs.

Grammy award winning violinist and producer Johnny Gandelsman's musical voice reflects the artistic collaborations he has been a part of since moving to the United States in 1995. Richard Brody of The New Yorker has called Johnny Gandelsman “revelatory” in concert, placing him in the company of “radically transformative” performers like Maurizio Pollini, Peter Serkin and Christian Zacharias.