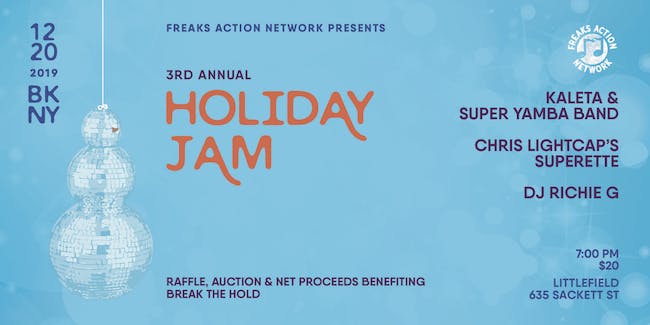 This year’s event will be raising funds for Break the Hold, an organization committed to “Break the Hold” on mental illness and provide education about suicide prevention. The Freaks Action Network will be holding a raffle and auction in conjunction with the show. Last year’s Holiday Jam raised over $10,000 for cancer research. If you are interested in donating items for the raffle or auction, please contact us at info@freaksactionnetwork.org.

The Freaks Action Network harnesses the power, energy and creativity of live music to generate resources and provide tangible support to those in need in our community and beyond. We share our strengths and love of music to make a positive difference in people’s lives. Visit us at FreaksActionNetwork.org.

Brooklyn afro-funksters Kaleta & Super Yamba Band are fronted by Afrobeat and Juju veteran Leon Ligan-Majek a.k.a. Kaleta. The singer, guitarist and percussionist from the West African country of Benin Republic lived his adolescent life in Lagos, Nigeria where Afrobeat was born. Kaleta performed and toured the world with the gods, Fela Kuti and King Sunny Ade, along with Majek Fashek and more recently Lauryn Hill.

Kaleta got his start in the late 70s performing in church and was soon after picked up by iconic Juju master and world music pioneer King Sunny Ade. A few years later Fela Kuti came calling. Kaleta would go on to tour the world playing guitar for the King of Afrobeat in his storied band Egypt 80 through the 1980s and into the 1990s.

Now based in New York City, Kaleta was overjoyed to find Super Yamba Band and hear their take on the vintage, psychedelic sounds of his native country. Super Yamba takes its cues from artists like Orchestre Poly-Rythmo, El Rego and The Funkees--all legends in their own right for pioneering the classic styles of Afro-Funk and Afro-Rock in Benin and Nigeria. Super Yamba Band have dialed in the nuances of some of the rarest grooves out there with a timeless sound that will move everyone in the room to dance! Audiences will hear Kaleta sing in several different languages native to West Africa including Fon, Goun, Yoruba and Ewe, along with French and Pidgin English, "the official language of Afrobeat" he says with a grin.

In 2018 Kaleta & Super Yamba self-released their debut single “Mr. Diva” on 7” vinyl. The 45 was quickly picked up for re-release by CA based indie label Ubiquity Records who were already familiar with Kaleta’s work as a guest vocalist on several records they released for producer/dj Bosq. Ubiquity Records released Kaleta & Super Yamba Band’s debut LP titled Mèdaho in September 2019.

‘Superette’ is the debut album from revered bassist and composer Chris Lightcap’s electrifying experimental band featuring guitarists Curtis Hasselbring and Jonathan Goldberger and drummer Dan Rieser, along with special guests Nels Cline and John Medeski. An endeavor for those who seek true exploration in music, Lightcap and company fearlessly guide the listener through soundscapes of surf, harmolodics, Mali-trance, psych and beyond, delivering a riveting sonic journey.

Lightcap has toured and recorded with Craig Taborn, Archie Shepp, Tomasz Stanko, Julian Lage, Joe Morris and many others. His playing can be heard on over 70 albums, most recently on Taborn’s acclaimed ECM Records release, “Daylight Ghosts” and Regina Carter’s Sony record, “Ella: Accentuate the Positive.” ‘Superette’ is Lightcap’s fifth release as a bandleader and composer, and he has been awarded commissions and production grants from Chamber Music America and the Shifting Foundation.