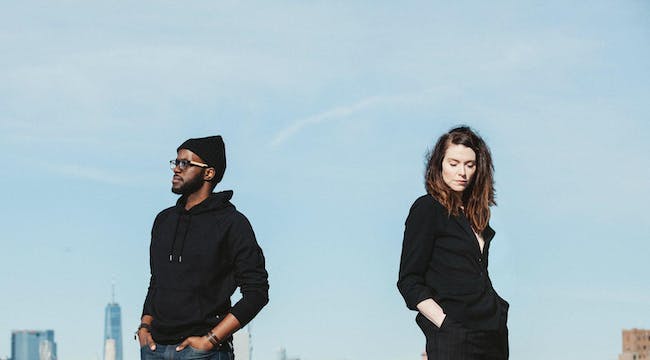 iCal
Google
The Bright Smoke's 'Gross National Happiness' is their first studio album in 4 years. Join us for the release celebration.

Emmerson and Her Clammy Hands - 9:15PM

Brooklyn-based duo, The Bright Smoke, announce their third, forthcoming album, Gross National Happiness, due out July 5. This release will be their first in four years, and of course, quite a bit has happened politically since then. Themes on the record range from reflecting on the dangers of false virtue, pushing boundaries, being the victim and the aggressor in the same breath, calling an end of violence, art as whole, and a subject dear to the band, identifying as queer.

First single and video, "Model Citizen," sets the stage for the album and aims directly at the hypocrisy of American government. LADYGUNN, who debuted the single, says, "The two create a moody ambiance that fuses together their own style of blues and indie rock that is quite an unforgettable experience. Wilson’s voice is a huskier version and evokes an equivalent spirit of Florence Welch’s."

Wilson, who wrote the song, says she "was inspired by watching a parade of public figures claiming to only want the best for people lobbying to do immeasurable amounts of harm to vulnerable populations. The sound and tone are upbeat with a tonally bright bridge that contradicts the meaning of the lyrics."

Quincy Ledbetter, who directed the video, says, "A lot of artists have a compulsion to create and share that exists right alongside of an overwhelming sense insecurity and inadequacy. In this video we tried to show how it feels to be at the precipice of giving up on yourself, while something inside of you forces you to keep going."

With their first studio album in 4 years, The Bright Smoke will release Gross National Happiness, produced by Quincy Ledbetter. A reinvention: written as a result of their first hiatus from live performance since forming in 2012, Gross National Happiness was recorded during a two year process of reckoning with unexpected personal, public, and global upheaval. Inspired by a toggling between witnessing a world that appears to be off its axis while still remaining steeped in the petty concerns of day-to-day life, the album takes on the voices of multiple narrators each increasingly less sympathetic and redeemable.

Mia Wilson of The Bright Smoke was dubbed as one of NYLON's "10 Queer girls in music we're obsessed with" and they said, "Her sultry vocals are timeless, and juxtaposed over the electronic vibes." On being queer in 2019, Wilson says, "It's always a bummer when we're still dealing with erasure of any kind within our community due to internal identity policing. Radical visibility and inclusion across the spectrum is essential."

Emmerson and Her Clammy Hands