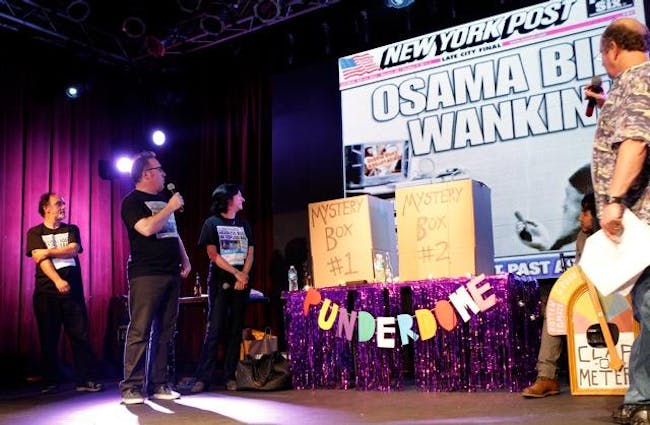 The PUNDERDOME®, NYC's Most PUNtastic Compuntition, celebrates the Fifth Annual NEW YORK POST Special Edition at Littlefield on July 18th!! Witness punning at its best as the POST Writers, who deliver the best pun headlines in the business ("Headless Body in Topless Bar," "Cloak And Shag Her - CIA Boss Petraeus quits over affair," "Ignorance is Chris, Christie denies role in GWB jam scam," “Weiner Exposed”), pun it up with the best punners in the U.S. of A., the PUNDERDOME® Champs!!! (If you saw last year's Puntastic "Posties and 'Domer Champs" Smack Down, expect more of the same!) NYPost Action!

Special Celebrity Judge to be announced!!!

The PUNDERDOME® is New York City’s wild & crazy monthly pun compuntition created by a “Rodney Dangerfield impersonator” and his alleged daughter (Fred and comedian Jo Firestone). The alleged dad will be hosting tonight! Pun-masters are determined by the "Human Clap-O-Meter" who "accurately and scientifically" assesses levels of audience applause. Warning for the faint of heart: the 'Dome is THE spectator sport – it gets loud; decide to attend at your own risk! Action!

Part of NYC’s comedy landscape since 2011, GQ Magazine shouted the Punderdome as one of the "5 Funniest Nights in America," and quoted comedian Chris Gethard on why it's great: "The crowd. You'd think you were at the Roman Colosseum. They're passionate, to a level that feels dangerous. And to reiterate, this is a pun competition."

"The lowly pun has long been considered the bottom-feeding bristle worm of the comedy world.... That has changed with the arrival of the Punderdome, a now monthly event that has turned punning into a high-functioning competition that is equal parts stand-up, beat poetry" - The New York Post

"(Punderdome is) both an endearingly homemade and impressively high-caliber show during which astute wordsmiths (including a crew of beloved regular punsters) spin clever and very funny puns to a packed house." - The New York Times

"Can you imagine a more potent cure for the weekday blues? Here was concentrated, unabashed silliness that I longed to bottle and smuggle out in my purse." - The New Yorker