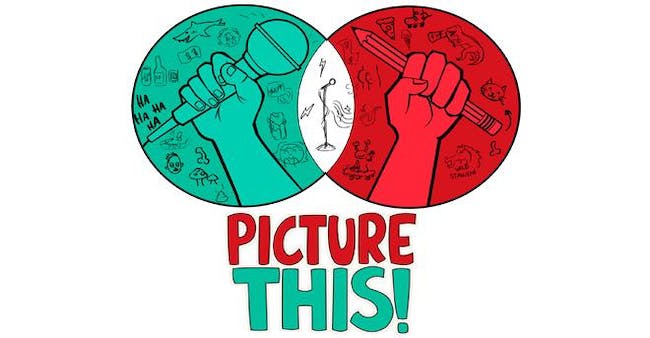 Picture This! Live from Home!

PICTURE THIS! is a new show from Brandie Posey & Sam Varela: two girls who want to push the boundaries of what a comedy show can be. Picture This! is a live comedy show with stand-ups, voice actors and more performing while they are drawn live by some of the best animators, cartoonists, and other artists in the biz! The comedians don’t know what the animators are drawing and the animators don’t know how the comedians will react.

It may be weird.

But it will be FUNNY!

10% of the proceeds will benefit The Okra Project. 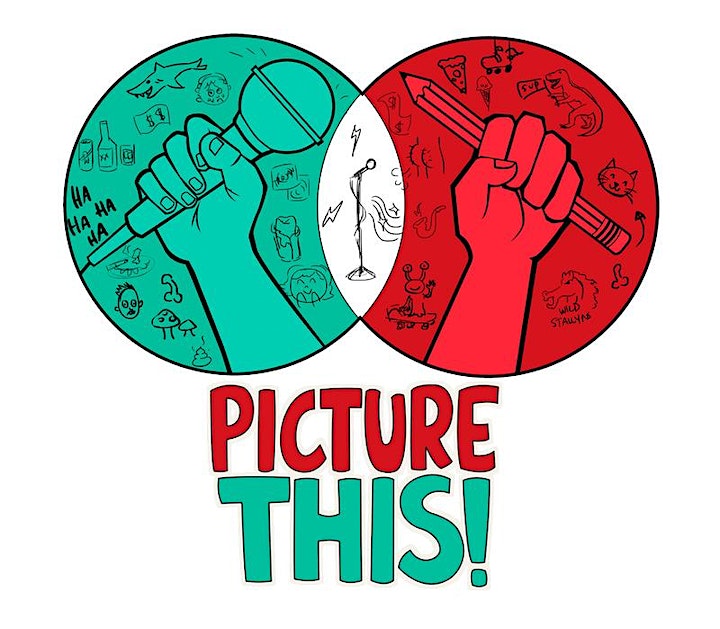 ﻿﻿Naomi Ekperigin is an actor, stand-up comedian and writer who has appeared on TruTV, VH1, MTV, FX, and HBO.﻿ Her Comedy Central Half Hour special premiered October 2016 and you can watch it now on cc.com. Naomi has written for Comedy Central's "Broad City", Hulu's "Difficult People" and NBC's "Great News". In 2017, she was listed as one of "10 Comedians You Need to Know" by Rolling Stone. A regular on the hit podcast 2 Dope Queens, you can watch her on episode four of the 2 Dope Queens HBO special on HBOGO and HBONow. Go, now, watch!

Myq Kaplan is a comedian named Mike Kaplan. He has performed on the Tonight Show, Conan, the Late Show with David Letterman, Late Night with Seth Meyers, the Late Late Show with James Corden, in his own half-hour Comedy Central Presents special, and in his own one-hour special on Netflix and now Amazon, “Small, Dork, and Handsome.” He has been a finalist on Last Comic Standing and recently appeared on America’s Got Talent. His debut album “Vegan Mind Meld” was one of iTunes’ top 10 comedy albums of the year, and his latest album “A.K.A.” is out May 8. Thanks for reading all this. You’re very nice.


Enjoy reading, watching, listening, thinking, laughing, and whatever else you’re doing. Or not doing. You’re an autonomous being. Have fun being and/or doing!

Ian Fidance
was on the second season of “This Week At The Comedy Cellar” on Comedy Central, hosting the show 6 times. He has a co-starring role on the upcoming season of “The Last O.G.” with Tracy Morgan on TBS and Netflix. Recently he was a contributing writer for the new season of the Comedy Central show “Crank Yankers,” and the Comedy Central Roast of Bruce Willis. He’s opened for folk rock legends The Lumineers in Brooklyn and appeared in the short film “Motherstruck” directed by Cynthia Nixon and produced by Rosie O’Donnell, which premiered at the TriBeCa Film Festival. He's been featured in the Eugene Mirman Comedy Festival, as well as the Boston, Brooklyn, and New York Comedy Festivals. He's written & performed in sketches for Comedy Central, Above Average, Conde Nast, Elite Daily, and Funny or Die. He’s appeared in commercial campaigns for Tik Tok, Jet Blue, Nikon, and was commissioned by Nike to write & star in a live media presentation for their "Hyper" line of clothing. His comedy has been described as “bizarre yet funny” by comedy news site The Interrobang, and he’s been written about in Forbes Magazine, Slate.com, and the New York Times.


After working a million jobs while growing up an only child to a single mother in Delaware, Ian has grown to be a live force and a stand out stand up with a fresh, positive voice in comedy. He can be seen nightly riding his bike(cycle) everywhere sharing his unique point of view and wild stories at places like Caroline’s on Broadway, The Comedy Cellar, New York Comedy Club, Stand Up New York,UCB Theatre, the Creek & the Cave, Union Hall, and The Bell House in Brooklyn. Every month he hosts a live stand up & animation show called "Picture This!" at Union Hall in Park Slope. He'll hit the road often playing clubs and independent venues all across the country, but will usually use his car for that.