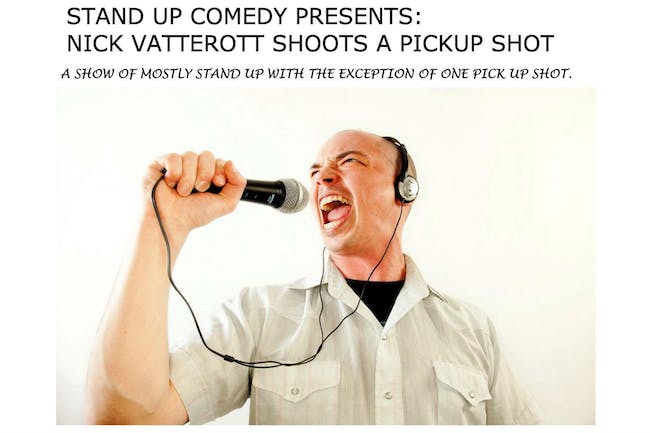 iCal
Google
A show of mostly stand up comedy with the exception of one pickup shot. What's the pickup shot for? What is a pickup shot? Nick's not sure.

Join Nick Vatterott and a few of his favorite comics as they all perform stand up comedy, and then at one point shoot a pickup shot. What's the pickup shot for? Who knows. What is a pickup shot? Well, Nick is not quite sure of that either. He's been in L.A. for a few years now and hears people talk about it all the time. It sounds cool and very important though, much like other industry terms like "back end" and "room tone." Maybe next time he's in town he will record one solid hour of room tone. But he'll need to make money off the back end first. Whatever that means.

So who the hell is Nick Vatterott? The Hollywood Reporter named him one of the “break-outs” at his Montreal Just For Laughs Comedy Festival debut. Since then he has performed on Conan, Late Night with Jimmy Fallon and has a Half Hour special on Comedy Central. Nick was a producer/writer/performer on Comedy Central’s stand-up sketch hybrid show Mash Up. He's written for The Critic's Choice Awards, Gorburger and Real Time with Bill Maher. His album 'FOR AMUSEMENT ONLY' was named one of the TOP TEN albums of the year by Vulture, Laughspin and Splitsider. Vulture named him in their list of THE 50 comedians you should know. He was the recipient of the prestigious Andy Kaufman Award and won a Webby for his podcast Heavyweight: A Sketch Show. Nick Vatterott has been called high-energy, improvisational, unconventional and outside the box. But what is his comedy like? Well, there are those who abstain from the absurd, and there are those who noodle nose ketch-up pants. Nick's comedy is one of those things. At least, that's what he read in his bio.