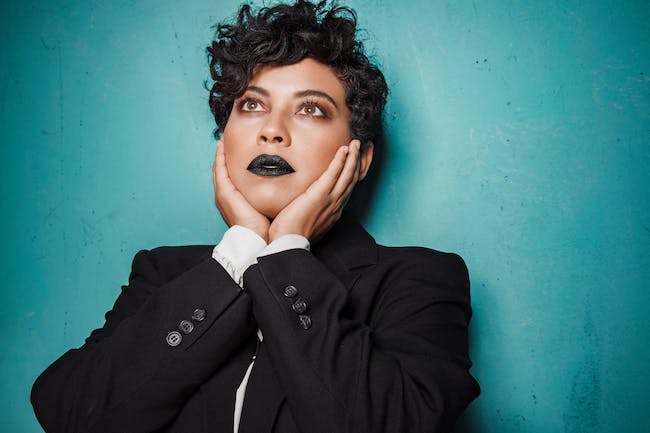 THIS SHOW HAS BEEN CANCELLED

Take note: this may be the last time we will all be assembled in this room—some of us might die someday. Lorelei Ramirez's playful morbidity seeps through in this multi-media comedy special, which invites us all to be unsettled together in this unsettling moment. Crafting at the intersection of art and comedy, Lorelei perverts the familiar and profanes the sacred—all in pursuit of one last laugh.

Lorelei is an artist, comedian, and writer based in Brooklyn. They have written, produced, and directed a comedy special called PERVERT EVERYTHING for Adult Swim. They can be seen on the HBO comedy series RANDOM ACTS OF FLYNESS as well as the final season of Comedy Central’s BROAD CITY. Out next, Lorelei is recurring on HBO’s new half-hour comedy LOS ESPOOKYS’ opposite Fred Armisen, and heavily appears in John Cameron Mitchell’s upcoming musical anthology podcast ANTHEM, opposite Glenn Close. Last year, they were named one of Comedy Central’s Up Next Comedians, featured at San Francisco’s Cluster Fest comedy festival. And most recently, they were invited to perform at the Public Theater as a part of 2019’s Under The Radar Festival. They are a regular correspondent on VICELAND. They’ve performed at Caroline's, UCB, Ars Nova, THE SPECIAL WITHOUT BRETT DAVIS, THE CHRIS GETHARD SHOW, The Brooklyn Comedy Festival and has exhibited their work at Family Business Gallery, The Living Gallery, Cloud City and The Experiment Comedy Gallery. They grew up in Miami, Florida and graduated from SVA.