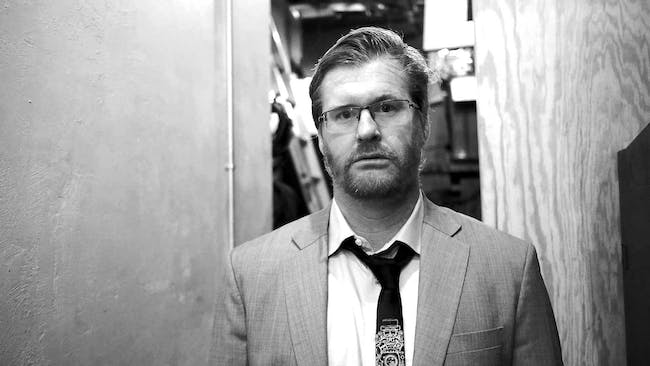 iCal
Google
Littlefield-favorite, Kurt Braunohler, is back with his very own brand of stand-up comedy.

Kurt Braunohler is a comedian, actor and podcaster who has committed his career to inserting absurdity into strangers’ lives to make the world a better place. He has an album, a half-hour Comedy Central Special, and his first televised hour of comedy, TRUST ME, came out on Comedy Central in March of 2017. Additionally, he appeared in the second season of Netflix’s LADY DYNAMITE in a recurring guest role as Young Joel, as well as the Judd Apatow produced film THE BIG SICK alongside Holly Hunter and Ray Romano, which he also wrote on.

On TV, Kurt can been seen (or heard) on BOB’S BURGERS, NEW GIRL, @MIDNIGHT, ANOTHER PERIOD, KROLL SHOW, DEADBEAT, COMEDY CENTRAL PRESENTS, DRUNK HISTORY, CHELSEA LATELY, JOHN OLIVER STAND UP, DELOCATED, GETTING DOUG WITH HIGH, ADAM DEVINE’S HOUSE PARTY, JON BENJAMIN HAS A VAN, ASSY MCGEE, THE HEART SHE HOLLER, HUMAN GIANT, and as host of IFC’s comedy game show BUNK! He has performed stand up sets on CONAN, THE TONIGHT SHOW STARRING JIMMY FALLON, LATE NIGHT WITH SETH MEYERS, and THE LATE LATE SHOW WITH JAMES CORDEN. Kurt can also be heard on the radio on THIS AMERICAN LIFE telling a story he is currently developing for film.

Kurt was featured in Variety’s annual prestigious “10 Comics to Watch” list, named in Time Out New York‘s list of 50 Funniest New Yorkers and Backstage Magazine’s “5 Comics to Watch,” “Comic to Watch” by Comedy Central, the New York Comedy Festival and Time Out New York, as well as “Best Male Stand-Up” by the ECNY and “Best Unscripted Host” by the New York Television Festival.

Kurt rode a jet ski from Chicago to New Orleans on a seven city water tour/mission to send 500 goats and 1,000 chickens to families in need in Africa. The adventure was filmed for a Comedy Central web series called ROUSTABOUT, which launched January 2015 on cc.com.

Kurt’s chart-topping debut album HOW DO I LAND?, recorded live at packed rock clubs, was the first comedy release for venerable indie label Kill Rock Stars, and was included in several Best Of 2013 lists. The album’s title comes from Kurt’s “Cloud Project,” in which he raised $6,000.00 on Kickstarter and hired a pilot to write the words “How Do I Land?” across the LA sky. The resulting skywriting images went viral.

Called “a prolific stand-up comedian” by the Los Angeles Times, Kurt has performed his whip-smart comedy on stages across the world including Outside Lands, SXSW, Moontower, All Tomorrow’s Parties, Bonnaroo, Just for Laughs in Montreal and Chicago, SF Sketchfest and IFC’s Comedy Bang! Bang! Live. Oh, and he once performed at Radio City Music Hall.

Kurt co-created and has co-hosted the continuously sold-out variety show “Hot Tub” for 12 years with comedy writing partner Kristen Schaal. The duo moved the show to LA in January 2013, where it was hailed “the hottest new comedy show” by Los Angeles Magazine. Kurt and Kristen continue to host and perform Hot Tub to a packed house every Monday night.

Kurt has a bunch of podcasts; his relationship podcast, WEDLOCK, which he hosts with his wife, Lauren Cook, launched on Audible in February 2018, and his podcast about adult friendship, EMOTIONAL HANGS, which he hosts with Joe DeRosa, came out on Feral Audio. Kurt’s popular podcast THE K OHLE WITH KURT BRAUNOHLER features some not-so-standard segments featuring Kurt and guests including Paul F. Tompkins, Doug Benson, Bobcat Goldthwait, and Kumail Nanjiani. Episodes are available on the Nerdist Network.

“A charismatic comedian with a flair for the absurd.” – The New York Times

“Kurt Braunohler is the closest thing we have to a real-life Willy Wonka.” – Vice

“Not only a singular talent, but an inimitable spirit.” – LA Weekly