In 2011 a group of friends at UC Berkeley had recently graduated and were contemplating job options. Finding that by hauling their spinet piano to nearby subway stations and busking together they could make enough to survive in the Bay Area, the path forward was clear. After the first few haphazard street shows and a generous write-up in the San Francisco Chronicle, the newly-formed John Brothers Piano Company began receiving opportunities to bring their wild sound in off the street. They landed a weekly residency at an after-hours club where they played from 2-6AM every Friday night for a year and have since been invited to play at The Fonda Theatre, Regency Ballroom, Great American Music Hall, Monterey Jazz Festival, SFJAZZ, Stern Grove Festival, Coup-de-Grace Festival, and Outside Lands. In addition to headlining their own shows across the US, John Brothers Piano Company has supported a variety of international touring artists including Karen O, Joan Osbourne, and Booker T.

John Thatcher Boomer (piano, clarinet), Arlo Perlstein (trumpet, piano), Jimi Marks (drums, piano), and Dustin Smurthwaite (bass, trombone) inject their diverse musical instincts and backgrounds into every composition. However, the defining quality of the band lies not in what genres it bends or blends, but in the fact that performance has always been their rehearsal space. From their first sidewalk street shows to the weekly speakeasy, an audience has been present throughout the development of their sound. Thus, while JBPC often explores new musical possibilites, the music never strays into the esoteric, for the constant audience demands their unrelenting energy and runs an electric current through everything they produce. 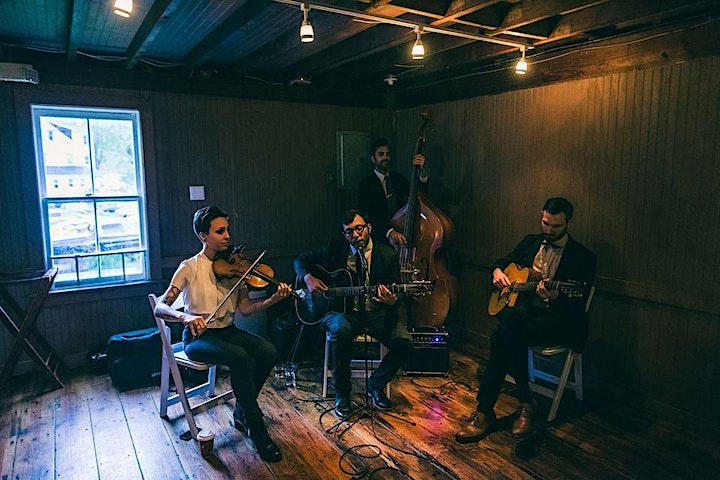 The Hot Club of Bushwick is a uniquely New York jazz band with a solid core and a rotating cast. The group has played for the Blue Note Jazz Festival with a slot at at B.B. King's Blues Club, is a favorite of the New York Public Library and their donor society, and has played countless times to rave reviews at private parties, swing dances, weddings and other events around the city - and the world.

We're a Brooklyn-based and have been playing together for years. Good music brings people together! The genre is generally hot swing and heavily inspired by the work of Django Reinhardt, western swing, and bebop.

The core of the group is a dynamic and experienced duo of guitar/voice and violin. The vocals range from full, soulful singing to a cool breeze, with the hot fiddle playing a perfect foil. We have a swinging rhythm section that can include double bass, rhythm guitar, clarinet, mandolin, accordion, drumset, or piano based on the needs of your event. Typically we are booked as a quartet with two guitars, fiddle and upright bass with our lead guitarist doubling on vox.