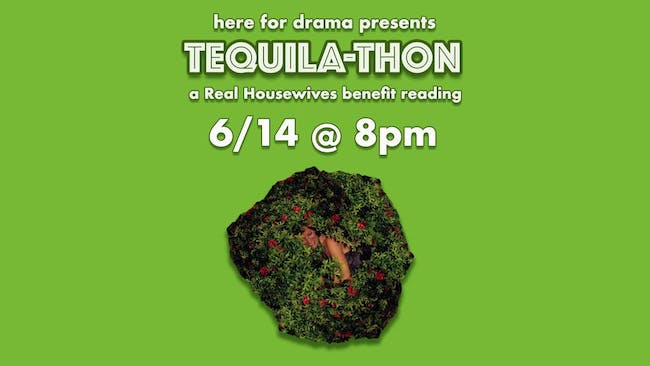 Here For Drama presents Tequila-Thon: A Real Housewives Benefit Reading, a dramatic LIVE reading of one of the best trips ever taken by Bravo’s Real Housewives of New York. Brace yourselves for chemically-peeled faces, arguments over bedrooms and who said what when to Page Six, self-inflicted stab wounds, poolside-catharsis, a Countess in a bush, a rose and a thorn, and the definitive explanation of the difference between Palm Beach and West Palm Beach. And, for those of you 21-and-over, a drinking game to play along at home if you’re so inclined!

A portion of the proceeds from this event will be divided equally between The Bail Project and the Black Trans Protestors Emergency Fund.

Update: Due to an overwhelming show of support, Brooklyn Community Bail Fund has asked that donations be directed elsewhere. This page has been updated to reflect that.

ABOUT HERE FOR DRAMA

Here For Drama is a performance/fundraising group founded by three friends that hosts live comedy events across NYC in support of various worthwhile causes. Some of our past beneficiaries have included: New York Women’s Foundation, Planned Parenthood, and God’s Love We Deliver.

Digital links to stream the show will be provided upon ticket confirmation.

Ira Madison III is a writer and host of the pop culture podcast, Keep It! As a writer, he’s most recently worked on Daybreak and Q-Force (airing in 2021) for Netflix and Nikki Fre$h for Quibi. Madison’s work can also be found in GQ, Vulture, MTV News, and other outlets. You can follow him on Twitter @ira and Instagram @irathethird.

Natalie Walker is a performer and writer. She has contributed to Vulture, The Cut, and Bookforum, and frequently appears onstage at 54 Below, Ars Nova, and Joe’s Pub. Her television credits include (and are limited to) Search Party and BoJack Horseman. You can follow her on Twitter and Instagram @nwalks.

Ryan Houlihan is a comedian and editor at InputMag.com. He can be found on Twitter and Instagram at @RyanHoulihan.

Milly Tamarez is a stand up, and writer based out of Brooklyn, New York.

She has written for NPR, BuzzFeed, Reductress, MTV, BRIC, and collaborated with HBO and The Root. She has been featured on Thrillist, Vice, BET, Flama, Above Average, Univision, and Comedy Central. She is the one of the creators and producers of Flexx (a satirical magazine for people of color) and Diverse as Fuck Festival, which highlights diversity in comedy. Milly is also one of the founders of the all women of color improv team Affirmative Action.

She has been featured in Vulture, Bushwick Daily, The Daily Dot, HelloGiggles, Galore Magazine, Adweek, and CodeBlack Report.

Paul McCallion is a writer, performer, and aspiring New York darling currently based out of his Brooklyn apartment. His comedy sketches have been featured by BuzzFeed and Billboard, and he can be seen on screen in Amy Schumer’s I Feel Pretty and the Lifetime original movie Web of Lies. Make sure to check out his weekly RuPaul’s Drag Race recaps on Vulture. Follow him on Twitter @OrangePaulp.

Michael Benjamin is an actor and comedian based in Los Angeles. He got his start in Chicago and trained at The Second City and Annoyance theaters, and has performed at various other venues throughout the city. Recently, he’s starred in Faces, a short film streaming on Dekkoo. You can find him on all social media platforms at @mfbenji.

Sarah Galli is the co-creator and host of the podcast "Andy's Girls," devoted to all things Real Housewives and Bravo. Guests have included Housewives from the New York City, Beverly Hills, Orange County, New Jersey, Dallas, Potomac, and Miami franchises, as well as numerous Bravoholic writers and comedians. A mix of C-Span and Iyanla: Fix My Life, episodes include discussions of franchise plots and deep-dives into the psychology behind the drama.

A theatre, special event, and podcast producer, she has collaborated with hundreds of artists, performers, and TV entertainers. For more information, please visit her website. You can follow her on Instagram @damegalli.

Here For Drama is a performance/ fundraising group founded by three friends that hosts live comedy events across NYC in support of various worthwhile causes. Some of our past beneficiaries have included: New York Women’s Foundation, Planned Parenthood, and God’s Love We Deliver.