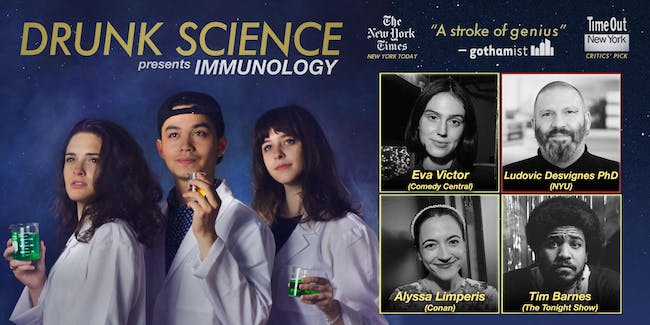 iCal
Google
THIS IS AN ONLINE EVENT: Funny people, smart people, a theme and lots of drinks creates the foundation for this show of wit and wisdom

Our live virtual show is an at home drinking game (so have those drinks ready!) featuring interviews with scientists, trivia, and comedic scientific presentations.

Alyssa is an actress, writer and comedian in LA. She spent six years doing stand-up, improv and sketch in NYC and recently moved to LA. Alyssa has been featured on Conan, Last Week Tonight, Ellen Digital, Netflix’s Aunty Donna’s House (premiering in 2020), MTV News Need to Know and Fox Sports. This year she was the lead in the indie feature Too Late alongside Fred Armisen and Mary Lynn Rajskub, the lead in the indie short Brand Finds God directed by Gonzalo Cordova and a supporting role in Just Chicken alongside Josh Ruben and David Ebert. Alyssa also voiced multiple characters on The Last Degree of Kevin Bacon on Spotify. You can find her writing in the New York Times, Into the Gloss, Riposte Magazine and Reductress. She was named Best Online Sketch Performer by the New York Times and was written up by Decider, Forbes, Vice, the Providence Journal, Middlebury Magazine and Vulture.


Alyssa has been trained at the UCB where she was on a Maude team and had a sketch run with Shannon Odell as well as at Stella Adler. Alyssa performs stand up all over the country as well as have performed her solo show No Bad Days at multiple festivals including Providence Fringe, Cinderblock and Improv Boston. She has a UCB podcast with May Wilkerson called Crazy; in Bed.

Eva Victor is an American comedian, writer, and actress. Eva began working at feminist satire website Reductress as an intern, where she found a mentor in Nicole Silverberg. She later became an associate editor and staff writer at Reductress. Eva has written for the New Yorker's Daily Shouts section and has appeared on MTV’s Decoded. She also works as an actress with the arts education organization, Story Pirates, based in New York City.

Eva has received press for the videos she posts on Twitter that have gone viral. She performed some of these videos at a live event hosted by Buzzfeed in 2019. Eva also makes videos for Comedy Central.

Tim has written for Nickelodeon’s reboot of All That , Comedy Central, the NPR quiz show, Wait Wait… Don’t Tell Me! and even documented his testicles once for Men’s Health. Chicago Magazine named Tim one of the 16 Chicago Comics You Should Check Out… and The Chicago Tribune has described him as “a smooth wordsmith who is sharp, polished and confident…”

Jordan Mendoza is an Asian-American writer, comedian, and filmmaker who works at Comedy Central. He created the Comedy Central Originals series “Apologies” and "Cry Battle". Time Out named him a "Rising New York comedian primed to break big.” Recently he appeared on Radiolab, was selected for the WGA’s Made in NY Writing Fellowship, and was retweeted by the Rock. He is active on TikTok.

Joanna is a New York-based comedian and writer at Last Week Tonight with John Oliver. She was previously Deputy Editor at Esquire.com and Senior Editor at Jezebel (and has contributed writing to one million other websites), is the host of the monthly experimental comedy show Drunk Science, and regularly performs around the city at the Upright Citizens Brigade Theater, the Annoyance, and the PIT. She completed a Robert Wood Johnson Foundation Fellowship in Science and Health Journalism at Columbia University, during which she saw a human heart just chilling out and beating.

Shannon Odell is a Brooklyn based writer, comedian, and scientist. She co-created, writes, and stars in the Inverse original series Your Brain on Blank. She can be seen on The Science Channel, acting as a science correspondent for the show What on Earth!. She is a host on the podcast The Science of Self-Care and a cast member on the podcast Fun CIty. She can also be seen at Weill Cornell Medicine, where she recently received her PhD in Neuroscience.

Ernest Myers is a writer/performer based in New York City and trained at UCB. Ernest can be seen monthly as Igor in Drunk Science and on Lloyd night at at UCB.