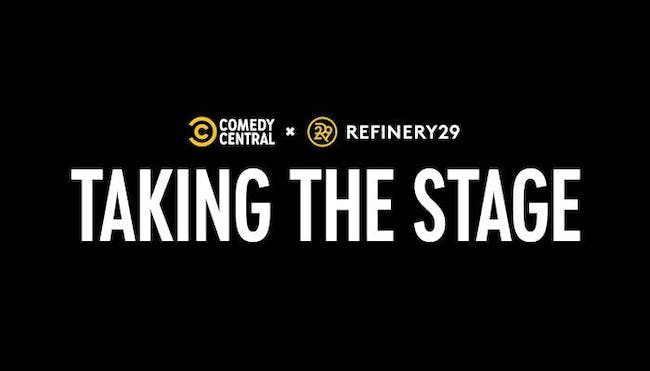 iCal
Google
Comedy Central Stand-Up and Refinery29 invite 8 hilarious comedians to take the stage. Oh, and there will be free drinks.

Comedy Central Stand-Up in partnership with Refinery29 are striving to introduce some of the sharpest, most distinct voices in comedy doing short sets. This live show features 8 hilarious comedians. Join our incredible comics as they show the comedy world what rising stars look like. The show is free and huge added bonus your first drink is on us (well drink/beer or wine). This is a 21 and over show. Amazing comedy and a free drink is Comedy Central's way of helping you celebrate the New Year!

Limited seating available. Your RSVP does not guarantee a seat.

Kat made her stand up debut by competing in Rooftop Comedy’s National College Competition, landing her a finalist spot in the prestigious Aspen Rooftop Comedy Festival. Since then she has appeared on FOX’s Laughs, and has made multiple appearances in many prestigious festivals including the Out of Bounds, Laughing Skull, Cabo, and Women in Comedy Festival where Kat took home the Friars Club Audience Award and was named “Comic to Watch” by Time Out New York. She was a top ten finalist in KROQ’s Kevin and Bean’s April Foolishness Opening Act Contest and was personally invited to perform in Tom Arnold’s Laughing with the Stars at the Hollywood Laugh Factory.

She has graced the stage of the world renowned Caroline’s on Broadway in New York and tours clubs and colleges across the U.S. and Europe. She currently hosts her own YouTube talk show, “A Chat With Kat” and writes for a main stage sketch team at IO West Comedy Theater in Los Angeles. Last year she released her debut comedy album with Uproar Entertainment entitled, “The Important Thing is That I’m Pretty” which premiered at #4 on the Itunes Comedy Charts. Her jokes can currently be heard on Sirius XM Radio, Pandora, and Spotify.


Marie was named a 2018 Comedian You Should Know by Vulture. She was also selected as one of Just For Laughs Montreal’s New Faces in 2017.


Marie co-hosts the weekly podcast The Unofficial Expert as well as the notable and long-running stand-up showcase Comedy at the Knit at The Knitting Factory in Brooklyn. She has also appeared on podcasts like Las Culturistas, Inside The Closet, Girls Gotta Eat and more