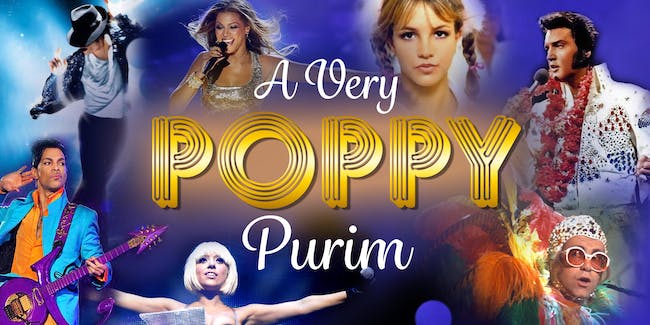 iCal
Google
Wait, so you drink like it's St. Patrick's Day, dress up like it's Halloween, and put on an interactive musical? What is this? It's Purim.

Every year, A Very Awesome Purim throws a big Purim party and puts on a musical about a drunken king, an evil prime minister, and a queen who saves the entire Jewish population. The production strikes a careful balance of off-color humor, on-key parodies, and surprisingly poignant lessons about cultural acceptance. With your help, we choose a theme—this year: "Pop Legends"—and translate it into an original musical telling the story of Purim.

This is what you can expect from the night:

And oops, we did it again: created a brand new show with a brand new theme voted on by you! This year, we'll be partying like it's 1999 BCE at A Very Poppy Purim. You are in store for a night of six-pointed star power, featuring pop legends from every generation including Queen V (AKA Veyashti), the King Achashverosh of Pop, Lady Estha, Morty Mars, and the Asshole Formerly Known as Prime Minister.

Note: You do not need to be Jewish or know anything about Purim to attend this Purim party. This is a celebration for everyone.

$20 tickets will be sold at the door.